Most obviously, Wonder Woman was the reason Batman Vs Superman was even watchable. As soon as her theme hit the audience knew she was there to save Batman, Superman and all of us from banality. Gal Gadot filling Wonder Woman’s boots and bringing the Princess of Themyscira to life in her own major motion picture filled many fans with excitement. But still many were cautious… or even critical of her armpits. 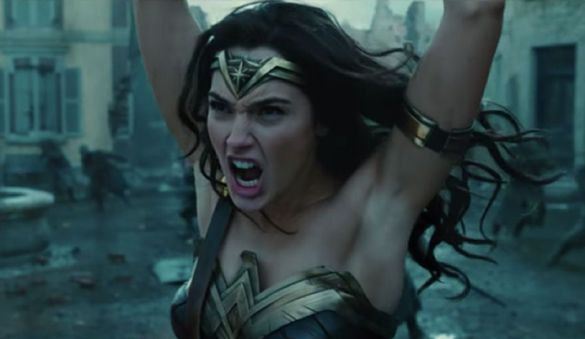 The movie begins first in the present day with a gift from Bruce. But we are quickly treated to Diana’s origin story. A young Diana, running through the roads of Themyscira. The only child on the island, she’s impatient to start her training to be an Amazon warrior. Destined to protect the world from Aries’s corruption. She grows up on a diverse island of bad bitches, everything is going so well. Until Nazis show up. (Okay, not really, just Germans.)

To be fair. First it’s Chris Pine. Who is a British Spy with no sign of an accent. He’s taken with her and the other Amazons (and their bioluminescent springs), but he is on a mission. Diana quickly decides to join him as she is discovering her true strength. Compared to even the other Amazons she is strong, she is trained 10 times harder (they say trained, not that she is naturally more powerful) but she doesn’t know what waits across the ocean.

People have been right to draw parallels between the behavior of Diana and Thor. Smart, although somewhat bewildered because of being raised without the industrial revolution. Honorable. Hyper capable. Muscular. Armor clad.

People also have some interesting ideas about how her upbringing affects to her ability to consent. The blogger, Christina Cauterucci states that there’s a love story “shoehorned in” is positioned as a “no homo” to Diana’s “inherently queer backstory”. I would argue that it’s not. The love story develops quickly and expectedly, yes. But why the upbringing is “inherently queer” when the other main characters on Themyscira are Diana’s mother and aunt and Diana is a generation younger than everyone else… I’m not sure. Cauterucci quotes Diana as saying that she learned about sex from books and knew men were necessary for reproduction but not pleasure. So maybe Diana did get some. It’s not implied any further than that whether she has or hasn’t had sexual contact. How this leads Cauterucci to the assertion that Diana’s ability to consent is blurry, I am unclear. Diana has never met a man, but that does not mean she has a child’s mind, and she barely had a sip of beer before they went to dance.

Steve Trevor doesn’t doubt her, he does talk down to her a bit because she doesn’t understand social conventions which could be annoying, if it wasn’t under the context of Steve urgently trying to stop WW1. Although they did have time for a clothes shopping montage in the midst of it which I did find obnoxious.

There are a couple other women central to the plot, one is Steve’s secretary, Etta. Etta didn’t ask for more responsibility but she handled it competently enough and she even got a brief moment of heroics. And then there is Dr. Poison. I was actually surprised there wasn’t more conflict between the two women, because usually there can be only ONE powerful woman. And they seek to destroy each other above all else. But that’s not the case here. Although Dr. Poison does get jealous over a distracting Diana in a blue dress after Steve accidentally wavers his attention. Dr. Poison is never fully fleshed out but her motives are her own and she takes great pride in her work… there’s something to be said for that… right?

Diana appreciates everyone for their efforts, whether its flying, sailing, fighting or singing, but she stays focused on her own quest. She is truly a Wonder Woman.

Alright, so leave me a comment if you want to debate consent, pit hair, how men control the whole world but don’t even know to take the eggs from the back when they go to the grocery store, if you think Wonder Woman could lift Mjolnir, if Steve Trevor is average or if you think I should have boycotted because Gal Gadot is a Zionist.