Harley Quinn #0 was so frigging awesome. One might think it would be tough to follow that up… and they’d be right.

Unfortunately the official first issue of Harleen Quinzel’s first book didn’t rock my socks off the way that issue 0 did. 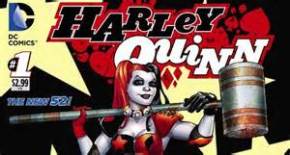 Dr. Harley and her little furry friends leave Gotham and their exploded dumpster home behind and head for Brooklyn. She inherits her building as promised… but there is a catch, the tenants- including a Danzig look a like- are behind on their rent, she’ll need to collect and then make half a fortune herself as she tries to pay for the building. So she paints herself up human for a therapist job at a new-agey drug free clinic and joins the roller derby- All the while dodging assassination attempts.

Newbie Chad Hardin’s art is detailed and suits both Harley and Brooklyn. However it seems as if even on the same page he can’t decide whether he’s going for Harley: playful scamp in a skimpy clown costume or stonecold icequeen sexpot. There’s nothing wrong with big boobs or skimpy clothes, but when facial expressions take the serious and sexy at random intervals and necklines and cupsizes change at random… I’m miffed.

I do have hope for this series yet. Harley is showing off her sensitive and independent side and we’re rooting for her to foil the assassins and their benefactor. Unfortunately, fans got a slow set up with this first issue.