Ichabod knows why Katrina is really in purgatory. But, now that they know Death himself is an enemy on a personal level with Ichabod, and the apocalypse is literally revolving around him, they decide that they  NEED Katrina.

Lena Gilbert, billionaire has just purchased a house, an old house, full of history, her family’s history in fact. As she scampers in with wide eyes, she finds a closet full of vines, one grabs her and cuts her, before she can react, they entangle her wrist.

Ichabod is missing his wife “at a time when people are giving thanks.” Abbie tells him that he has lost more than any man should and she understands and doesn’t take it personal that he is lonely.Irving calls the pair into his office. Turns out Lena’s family went back to the founding fathers. She’s “missing.” Also, it turns out that Lena’s family is also Katrina’s family.

The manor was a sanctuary (and former slaves could stay there safely and earn a fare wage). Upon entering, Abbie finds the man who was with Lena dead, appearing to have been attacked by an animal.They also see bloody hand prints and drag marks across the floor. Abbie tries to call it in: no signal. Goes for the door: it slams in her face. 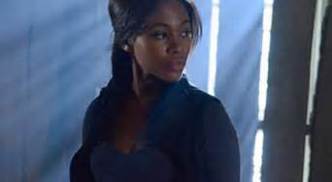 Abbie sees a ghost, typical Insidious style hauntings and creeps. Ichabod remembers a trip there with Katrina. When, in being a quaker a nurse and a witch and a debutant was she doing this? her backstory is preposterous.

They find Lena in the closet and do their best to untangle her. And outside those trees come alive. She screams at them that the house is alive (they don’t listen).

Back at Irving’s office, Jenny tries to invite him to dinner, his family shows up… nice to see some of his back story.

Apparently, in Lena’s family tree there was a warlock, he put a protection spell on the manor that got out of hand. What’s outside starts coming for them (filmed “ghostfacers” style, in the dark, choppy with flashlights for effect. It’s well done, helps the audience feel the sensation of being pursued).

Irving tries to explain to his ex-wife about the crazy things that have been going on, she accuses him of hiding from his responsibilities as a father. Macy and Jenny have a heart to heart. Jenny never really had the family thing and is nervous, it’s very endearing and it’s nice that Frank is getting a complex backstory as well.

At the haunted house, the two lose track of Lena and Abbie follows a ghost and sees Katrina birthing a son. Ichabod’s son. Then crows commit suicide smashing themselves into the windows. The second the son was born is when the tree people come to life. They escape with Lena after a creepy battle by leaving in the same way the nursemaid took Katrina and the infant- but Crane goes back in and works out some rage against all those evil things that come for him and his.

At the end: Lena Gilbert sends them a gift  the documents that she found. Abbie’s ancestor brought Ichabod’s son into the world. And then they celebrate Tgiving with some rum! And toast to finding family! 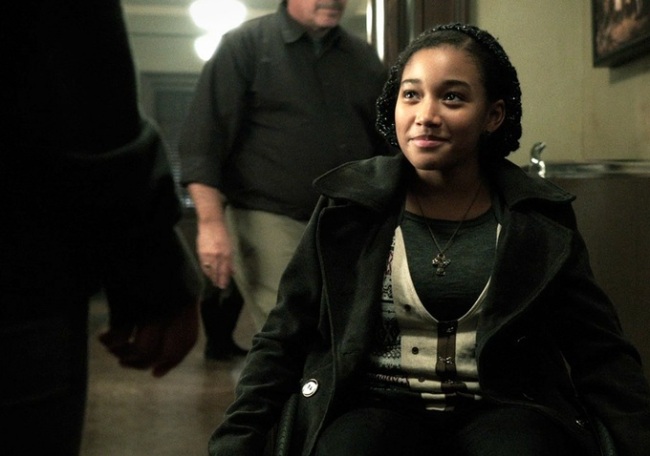 This episode was great: excellent character development for Irving, brief but awesome Jenny appearance, Macy (Irving’s daughter) was played by Amandla Stenberg (Rue from Hunger Games). Super diverse cast gets more awesome by the moment. Apparently next week Ichabod is trying to find his son… reads the line “how far will a father go” …umm… he just found out this child existed…  maybe I’m bitter, but DNA does not make you a parent. But John Noble will be back!

The live tweet got a little intense as we debated the relationship status of the Mills sisters and their friends. Any hook ups that you’re waiting for? Or are you not buying the hype? Think Ichabbie should just go the “friends forever” route?

Also, I can’t be the only one who thinks that Katrina is ridiculous: she’s a Quaker nurse debutante witch …and mother. I feel like they constantly change her backstory (and then smush them all together) to suit their needs as the story continues.