Riley Neal (Meagan Ory) moves in next door to Gabriel (Josh Holloway) in a move that she calls “close proximity” and he calls “stalking.” Of course, Gabriel has a chip in his head that connects him to THE ENTIRE INTERNET AND ALL DOCUMENTS THEREIN. So “Privacy” is really a relative term here. We get flashbacks of Gabriel’s overt operative wife heading out for her last mission. She didn’t want to go, she was thinking about leaving the agency. 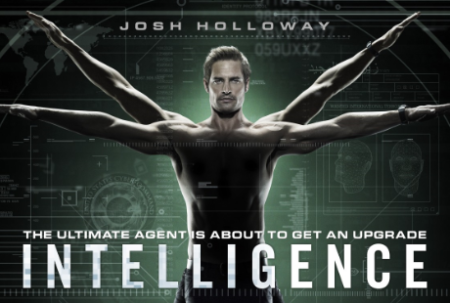 The current premise: A terrorist and suicide bomber uses and untraceable explosive (stolen from an American scientist that went unreported) called Red X to carry out attacks. One man swallows the explosives, another holds the detonator. One of the men is Ibrahiem who was last seen with Amelia, Gabriel’s wife. He makes it to the US, travelling with an unidentified woman. Gabe instantly believes this is his wife. He’s right, of course, but before this is verified. They question his ability to do his job protecting the US from terror threats with Amelia involved. He can’t do his job, by the way.

When they track down the terrorists it’s two men. There’s a rad fight scene in an elevator… 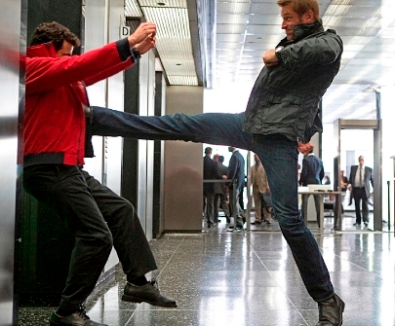 but as Ibraheim is getting away, Riley sees that the getaway driver is Amelia. Riley shoots at her which enrages Gabriel. But Ibraheim and Amelia escape. For the next attack… Amelia is the bomb. She’s the bomb. She made the choice. There’s no detonator. The bomb was on a timer. Amelia tells Gabriel to go away. Riley busts in, Gabe wants to set off a defibrillator to stop the timer. But the machine needs to charge. It takes too long and Riley tackles Gabriel out of a window and into the river just before Amelia explodes.

So did she really go rogue? What made this covert operative turn against her country?

Gabriel is furious at Riley, he believes that he could have saved Amelia. Riley says it was one in a million. “My life. My choice.”

But that’s not true…

In the very end it is revealed that Amelia left a clue for Gabriel to find.

The show won’t dwell on Gabriel trying to find Amelia I was completely surprised that this particular story line was wrapped up in episode 2. The exchange between Gabriel and Riley was very touching. Gabriel is grappling with the fact that he isn’t allowed to be a human. He’s a machine, an instrument, a weapon. He isn’t entitled to his own life, impulses or emotions. That makes for an interesting dynamic where Gabriel is property and a hostage. Riley is his caretaker, his body guard… but she’s also trying to be his friend.

The biggest shock was the reveal that Amelia had tipped off Gabriel. Will he find out? At this point there is nothing that can be done… Amelia is dead… I was really surprised about that particular plot twist.

The first half of this episode I wasn’t really buying in… but it really took a turn that surprised me. Except; I hope that they didn’t fridge Amelia so that Riley and Gabe can get close… I’m not fully on board but I’ll watch next week. Gabriel got back to his wife way before Detective Kennex.