The mere mention of her name gets a strong reaction from Outlaws, pirates and space forces alike. She steals and android from notorious Chinese pirate guild, the Kei Pirates, and in an altercation that ends with the death of their leader at her hands.. she loses one of them, and an eye. She gets a cybernetic arm and swears vengeance! Doesn’t that sound wonderful? Sadly, Hot Ice Hilda only lives 2 episodes in to Outlaw Star.

Hilda’s pursued by the Kei pirates across space and crash lands on Sentinel III. With her ship and arm in disrepair she plays innocent under the identity of a blonde rich girl named “Rachel Sweet” and cons Gene Starwind into helping her out with materials and repairs. She also enlists him as a bodyguard. When Kei pirates catch her scent, her true identity as the infamous outlaw is revealed. Gene attempts to complete the job he agreed to. He shoots the pirates with the magical and obsolete Caster Gun while Hilda chucks grenades, they make it to the barn where the ship is hidden, Hilda thanks Gene …and then shoots him and takes Jim hostage to finish repairs.

Gene doesn’t die and she ends up taking him along into space (which he’s always been afraid of) they get into various shenanigans and the two have sex. Hilda has the stereotypical warrior/traveller viewpoint and just wants a warm body next to hers. She on the “masculine” side, she yells at Gene when he is scared she is demanding and doesn’t do anything in the way of being sympathetic -but she still encourages him. After a brief stop over on Blue Heaven (where guns are not allowed and she fights with her badass robot hand and a taser) she, Gene, Jim and Melfina return back out into space and they are attacked by Kei Pirates and the outlaws The MacDougal Brothers. Hilda proves that she will do anything to the Kei Pirates. Even if it means her own life… Her message to Gene?  “Outlaws never go down easy, now matter what happens to them.” And she dies taking out the last pirate there to fight.

Hot Ice Hilda is responsible for the whole plot of the series! Hilda was the one searching for the Galactic Leyline. She didn’t know what it was, she just knew Kei pirates wanted it, so she wanted to get it first. And you really can’t argue with that logic. She’s vengeful, but mature and rational, capable, savvy and utterly ruthless. She was the one responsible for getting Gene into space and off Sentinel III where he was a big cocky fish in a small pond. She was the catalyst for so much of the plot. And she was fridged. But she provided more than emotional turmoil for Gene (although there certainly was that), her infamy brought them enemies, her disregard of an order from a Ctarl-Ctarl ship brought the wrath of Aisha Clan-Clan down on Gene and co., her death left Melfina’s existence a mystery and a treasure to be searched for.

It’s just really awesome to have this REALLY not girly, not conventionally feminine love interest who gets some unassuming man caught up in the adventure of his life. In many adventure fantasies it is a woman getting dragged behind as the plot unfold because of the drive of a man. But in this one everyone else is just along for the ride, whether they want to be or not.

Too bad that she was too badass for a story about some guy with red hair and his 11 year old business partner. (Just kidding I love this show, but it would have been totally different if she hadn’t left Gene alone in space to have his adventure and get vengeance)

As I have mentioned, I was covering Anime Boston last weekend and while I was there I picked up some goodies.

Including this manga right here! I loved the Trigun anime series, which wasn’t nearly as popular in Japan as it was on Cartoon Network. We have a flashy gunslinging hero with a 60 billion double dollars bounty on his head who goes on adventures on desert planet Gunsmoke with a motorcycle riding priest. I was pretty much raised on Westerns and Space Westerns were kind of a natural progression for my overactive imagination. He’s a Humanoid Typhoon! 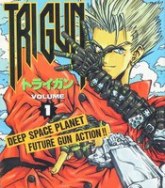 The series was verbatim to the original manga. Trigun Maximum is a continuation from where the series stopped (the crater being put on the moon), it picks up 2 years late, with Vash living under and fake name and Meryl and Milly have returned to their jobs in a more mundane capacity. The art is a little messy but I might only be saying that because full color comic books have spoiled me immensely. But I do love Vash the Stampede (not as much as I loved that showy dude with a kooky name from my other favorite Space western- Gene Starwind), Vash- despite being a gunman and a NATURAL DISASTER- doesn’t want to kill anyone, so he takes many blows himself, this leaves him scarred up and somewhat bionic.In Vol. 1 he faces a gang that’s using his name for purposes of extortion and a town driven to the brink by constant threats of murder. Vash finds non-violent solutions for both of these scenarios, but the priest, Wolfwood, bears bad news. Knives is back. Knives Millions is Vash’s brother who was willing to wipe out a whole planet because he saw humans as inferior.

In Vol. 1 we also see that the priest, Nicholas D. Wolfwood, doesn’t take the “thou shalt not kill” thing as seriously as Vash. They butt heads immediately about how much force is excessive.

Vash’s sensei who outfits him with the weapons he needs to fight knives agrees with Vash’s actions, but his sensei’s new protege, Brad, sees it as a waste of time.

There are interesting debates about morality. But through this volume he chooses the Justice League code of ethics.

Meryl and Milly, two women who work for an insurance company tasked with minimizing the damage caused by the Humanoid Typhoon briefly appear and save Vash’s butt. They’re fun characters. Meryl is smitten with Vash but doesn’t blindly follow him. She has to “minimize damage” as part of her occupation but she, along with Milly, also are Vash’s protectors. 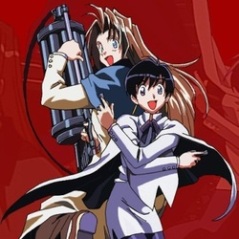 I want more! I’m not sure why it never occurred to me to seek out more source material from a series with characters I enjoyed so much! worthwhile purchase, indeed. 4.5/5

On the tail of Anime Boston, I’m going to be cramming as much anime and manga as possible. From bonus reviews to anime themed specials for the weekly posts.

As some of you may know, I was fully enthralled with Tuxedo Mask as a tween. But if they lept out of the screen to become humans, I would certainly have a thing for Gene Starwind. 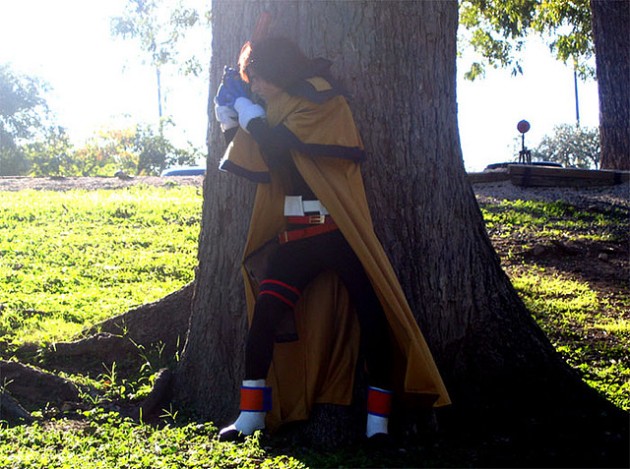 Outlaw Star is the story of a man who has a fear of outerspace after an attack that killed his father and crash landed him of Sentinel III. Through a series of ill advised odd jobs he winds up on an intergalactic treasure hunt. He faces hitmen (and hitwomen, and teams up with some of them) and faces the MacDougall brothers who killed his father. He’s kind of maladjusted- Gene is brash and perverted, his best friend and business partner is 12, he’s a braggart and he’ll do anything for a dollar… or oldschool ammo.

But he can be sweet (when he’s not trying to impress anyone) usually to Melfina, sometimes to Twilight Suzuka. Mostly he has a live fast, die hard philosophy. I mean, he uses magic bullets that deplete his life force to take on Tao Priests. 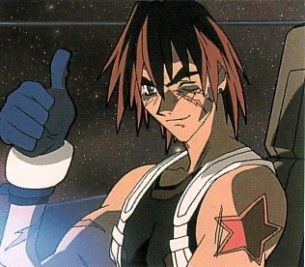 Just one of those flawed retro-future heroes, he’s often compared to Trigun’s scarred up, flashily coifed, troubled protagonist, Vash the Stampede. But Gene is without an angel arm or any “powers” of his own, a regular guy with a soul sucking sidearm who will casually share a meal with an alien assassin.

Gene proves he’s more than a perv when he promises that he will help the almost human android Melfina find out who she really is all while hunting for the galactic leyline and battling the MacDougalls, he thwarts legendary assassin Twilight Suzuka and then asks her to join his crew after she deems herself a failure for not killing him, he also takes pity on the outcast Ktarl Ktarl and puts up with her pompous showboating. All while mourning legendary space pirate “Hot Ice” Hilda. Clearly not fearful of strong women. Always a plus.