One of those sequels that comes out substantially after the original. Wolf Creek came out in 2005. The premise and main character are repeated.

The murderous bushman Mick Taylor once against targets travellers and those who would seek to stop him. His wrath is first turned against cops who heckle him, then to a couple travelling internationally, Katarina and Rutger. Rutger gets mangled by Mick rather quickly and Katarina falls to shambles, frozen in terror, Mick easily knocks her out. She awakens to Mick shredding her boyfriend’s limbs in a woodchipper. She tries to make a break for it, another traveller (this one from England) stops for her and a car chases ensues. Paul, the Englishman, causes Mick to crash and it seems as though they’ll get away: until Mick pulls out his rifle.

This whole: you shouldn’t have come here/you don’t know about us/backwoods maniac thing has been done well recently in In Fear.

It’s overdone here, but it works. The gore is overt, gallons of blood, decapitations, bullet holes the size of fists. Paul does all he can to out run, out wit and fight Mick, but his terror is palpable. He runs off into the wilderness in the hot sun with little water and no clue of where he’s going and is momentarily saved. When Mick turns up again, he goes into full panic. Ryan Corr does an excellent job. When he can’t get away, he tries to be charming instead. It briefly works. Briefly. 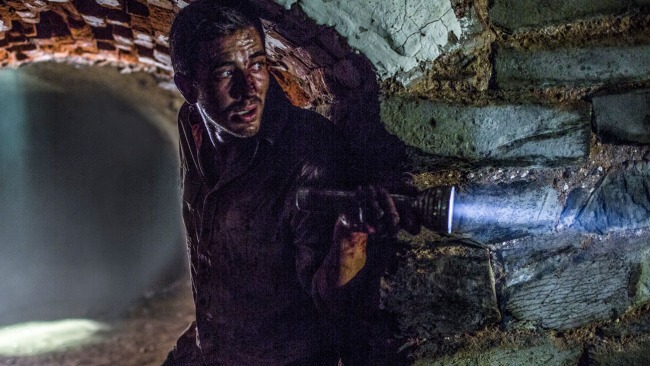 John Jarratt really sells it as Mick Taylor, a man deranged enough to kill a young man for not knowing who Australia’s most famous cricket player is. His antics are so out there that extra credit should be given to Ryan Corr for acting scared rather than laughing in hysterics. Paul is a very easy character to root for, every time he sees a light at the end of the tunnel I was elated for him, and his reactions are realistic to what a naive traveller would experience.

Overall: Night and day changes seem inconsistent. But it hardly matters. There is one moment that had me panicked while Paul is in Mick’s dungeon and sees Mick’s previous captives.

But was it scary? The creep factor is real. Horror flicks centered around travellers always get to me more than others. I travel. And things are unreliable, you get lost, your technology might not work, you might get mugged and there’s not a branch of your bank, you might get lost, you don’t know the customs, you can’t call your people over to help you out. And people in this world still hold tight to “survival of the fittest” as a valid way of life even though we are evolved (supposedly). It was really gross, a little tense and decently acted. Greg McLean nailed it on this delinquent follow up.