The show starts with me yelling, “Joe! Find your sister! Junior has her in a hole. I know in your world it’s been 2 days and not 3 weeks, like it has for me, but really! But really.” But he doesn’t he just make googoo eyes at Nori.

Things are getting tense. People are losing faith in Chester’s Mill PD. Paul (the officer who’s losing it and shot the dome, killing someone with the ricochet) traps Linda in a cell. Then she tells off Big Jim, hooray! Oh, Big Jim is apparently a hard ass who made his son play football. I still don’t feel bad for you, Junior. Asshole! Junior tells Angie: “It’s the dome that’s making you act like this.” She says: “It’s you locking me down here for 2 days.” But then she reminds him of some secret underground tunnels. Maybe they can go together. Outside of the bunker. She’s clever.

The dome goes all the way through the tunnels. Junior finds out Julia followed him. The manhunt gets messy. Joe’s sidekick invites over a bunch of hotties to charge their smartphones. Julia has a heart to heart  cuckoo-bananas. How can you tell him the truth and not Barbie! You are a bad judge of character! If you believe Barbie is a psychopath…. ARGH! No one feels bad for you Junior! 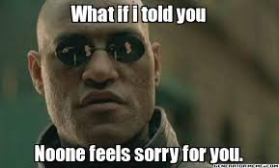 Then Big Jim and Barbie have a heart to heart WTF Big Jim tells us how he got his nickname (blah blah, high school football hero… ZzzzZzz) and Barbie says, “Sounds like being on your team could be hazardous to my health.”

Nori tells Joe, “Thanks for almost getting beat up for me that was kind of chivalrous.”

Then Nori and Joe have freaky “pink stars” seizures.

Angie patches up Junior’s hand (which he bruised on the dome “because he loves Angie so much”) Angie hides the scissors. I can’t wait till Angie stabs Junior with those scissors!! 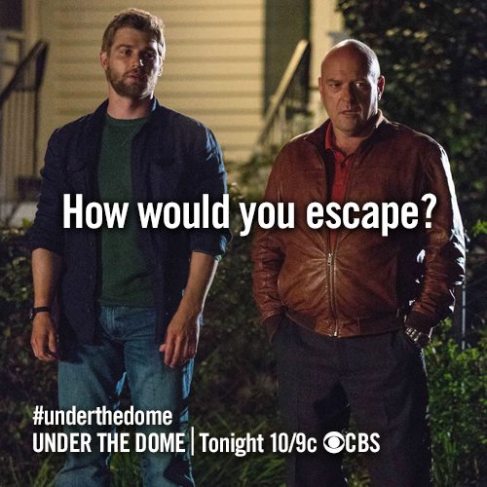 No where near enough of the WYBS DJs! Damnn youuuu