upworthy takes on female fantasy armor. Creator of 90s cartoon Gargoyles releases YA series that takes place on fictitious islands in the Bermuda Triangle includes ghosts supernatural forces as a group of friends try to solve a mystery. The Jem and the Holograms movie is being cast on tumblr but sadly it’s being made without creator Christy Marx

John Ostrander speaks up about the changes DC made to his character Amanda Waller.

In “But Why?” news: The Grudge is getting a reboot.

+Walking Dead tribute brew is made with …real brains. Smoked goat brains that is.

Any guesses as to what FOX’s mystery Marvel movie will be?

Is This A Zombie was rereleased today as a “classic” by Funimation.

I’m staying optimistic about the rad diversity that the Sailor Moon reboot will bring.

eBook manga is hitting the US (+ beyond) thanks to Yen Press and Square Enix, first titles include Soul Eater and Black Butler.

Getting in shape for spring?

Will Lupita Nyong’o appear in Star Wars VII? Rumor has it.

Check out this video of Superman with a Go Pro!

Comic Book Resources has the scoop and some pics from the set of the upcoming Fox show Gotham.

Anime Boston is this weekend and I’ll be on the scene Saturday! Let me know if you’re around!

Short posts today. But I’m heading out to do that Thor workout, catch you for the Marvel:Assembling a Universe live tweet tonight?

Comics Alliance featured an essay about IDW’s “sexualized” PowerPuff Girls #6 variant cover that got pulled in the dust up. It pretty much summed up my feelings on the matter, but NBD if it outraged you. There’s a lot to be mad at about out here. What you can’t be mad about is Eric Stephenson an Image comics publisher throws down for the ladies and tells writers and retailers alike that women WANT comics, be inclusive and they will come.

Of course, dumb-dumbs everywhere think that female supes can’t handle a movie of their own. But, well, tough shit. Black Widow’s getting her own movie. Slated for sometime after summer 2015, it appears Black Widow will get a movie before the illustrious Wonder Woman (because Marvel > DC, just saying). Although the new Black Widow comic book series didn’t thrill me, I think if they did this with a little more 007 flair, I could really get into it. And, come on admit it, the first Captain America movie was sub par and everyone is seeing this one because Marvel cinematic universe is a steam roller at this point +special effects +ScarJo is there. A Black Widow movie would do just fine. (PS Scarlett Johansson is expecting her first child, congrats!) But a recent essay on Storm over at KissMyWonderWoman  about Storm made me think about how rad it would be to have a X-Men movie that followed Ororo and Yuriko. They became fast friends under Claremont’s pen, and it would make sense since Yuriko followed Wolverine to the US after The Wolverine. I’m just saying: you should make that. Come on 20th Century Fox.

We get details about Terminator: Genesis (2015), which will revisit big moments from the first 2 movies. So it’s not remake, but an in continuity retcon. I think. According to MovieHole:

“Firstly, we will indeed be revisiting the events of the original 1984 film again. The ‘Terminator’ from the future will arrive on earth, attack some punks (keen to see who they get to play ‘Bill Paxton’), and then slaughter his way through a bunch of Sarah Connors’ – until he finds the correct target. And all the characters that appeared in the Cameron original, like Detective Hal Vukovich (played by Lance Henriksen in the original), Lieutenant Ed Traxler (played by Paul Winfield way back when), Sarah’s roomie Ginger (Bess Motta in the ’84 film) and, yep, even Pugsley the Iguana, return. So, yep, we’ll likely get to see Schwarzenegger back in the leather jacket and cool sunglasses he wore in the original. And, of course, Kyle Reese (Courtney) volunteers to go back to 1984 and save Sarah – just as he did first time around. But don’t expect everything to work out like it did in the original.. something is going to play out different.”

How (or ‘if’) they’re going to explain the THREE decades older Schwarzenegger, reprising his 1984 role, I don’t know. Which of course makes Hugh Jackman’s recent comments about his days as Wolverine being numbered slightly ironic. Days of Future Past will be his 7th time as the adamantium boned hero since 2000’s X-Men. Jackman recently told IGN “Look, that’s inevitable, man. Anyone who thinks they’re indispensable in this business is fooling themselves.”

And it all comes back to Marvel heroes again: Pumped for Agents of SHIELD’s return tonight? Bill Paxton drops in for tonight’s episode. Check out Comic Book Resources interview with Jed Whedon and Maurissa Tanchareon where they discuss May and Ward’s relationship, epic guest stars and tiny hints about what’s in the works. Still not OFFICIALLY renewed, though.

Photos from Sin City 2: A Dame to Kill For emerge, the older -and blonder Jessica Alba is smoking hot as usual. ❤ ❤ Jessica Alba.

Step one: Haunt Gail Simone’s twitter. Remember that Tomb Raider  #1 come out tomorrow. Find an indiegogo for a She Walks in Shadows, an all female HP Lovecraft inspired anthology. If you throwdown $500 you get (among other things) a ukulele fit for an Elder God. Bitchin’.

Step two: Check on Brian Wood. Find some sneak peeks of next issue (which I’m super excited for even though I chewed the last one a bit).. it’s one of Mann’s pages (the people involved don’t make sense to me in continuity with the last one. Whatever. I’m letting it go) 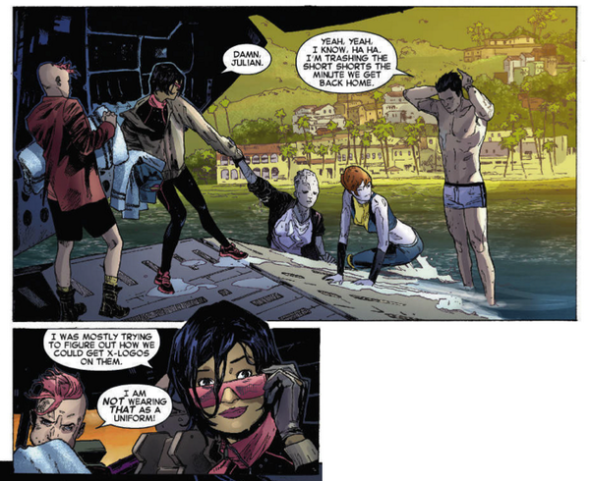 Step 4: See what’s going on on flipboard. Find an article about men using chivalry to emasculate each other, 4b; realize you “don’t understand men,” 4c; realize you flipped the big tire at crossfit to show off to another woman. 4d; remember that gender roles are bullshit.

HOLY SHIT A CAR THAT RUNS ON AIR (mostly)

RunDisney announces an Avengers themed Half-Marathon. So dust off your kicks, your GPS watch, your purple sweats and your green body paint and get ready to SMASH the finish line! Registration opens March 25th!

In the TV world: Almost Human and Agents of SHIELD still not officially renewed or cancelled. No official news about Dracula. Almost Human and Dracula need another season. I’m not fully on board with Agents of SHIELD, I keep watching, but they’re lucky Ziva left NCIS or I wouldn’t have. CW is where you want to be if you’re a supe, Supernatural, Arrow, Vampire Diaries and the Originals AND (probably) Beauty and the Beast are renewed.

Under the Dome will be back June 30th, new teasers came out already, hinting at “an unexpected romance” and the death of two favorites in the season premiere. I hope it’s Junior.

And for no reason, a pic of Jessica Alba looking like Drew Barrymore in Scream: 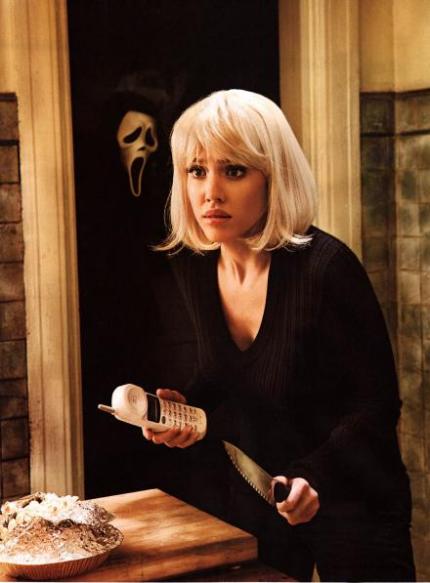 Ooooh, and a really rad article about a Siberian mummy and her 2500 year old tattoos. Who says tattoos will look ugly when you’re older?