One sentence review: Surprisingly awesome movie about a children’s building toy has surprising messages about activism, creativity, being “special” and how nerds wreck things made for kids. And jokes at Green Lantern’s expense. 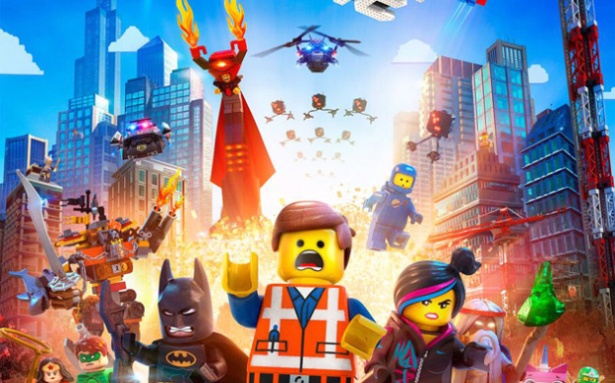 Spoiler Free: Emmett is ignored at work, doesn’t have any close friends and there’s nothing really remarkable about him. It doesn’t bother him at all. He follows instructions and keeps smiling and thinks everything is awesome. Everything changes when he meet WyldStyle. She’s looking for the Piece of Resistance. Which is accidentally stumbled upon by Emmett. She tells him about a nefarious plot orchestrated by President Business (alternately Lord Business) that threatens to freeze everything as it is, using the Kragle, so that nothing can change. Emmett finds out that he is “the special” sent to save everyone and he teams up with his new special friends to stop Lord Business and the Kragle at all costs!

It’s so cute. And so good. And seems as if it could have been strung together by a child but in a good way, mostly. There are artifacts from the real world incorporated but manly it’s an awesome mishmash of colored bricks and Lego licensed characters. Batman, Superman, Wonder Woman, Green Lantern, Shaq, 1980’s astronaut, Mermaids, Pirates, Cowboys, Chewbacca, Dumbledore. Nerd cookies everywhere!

Mild Spoilers + Analysis After the Photo of Lord Business 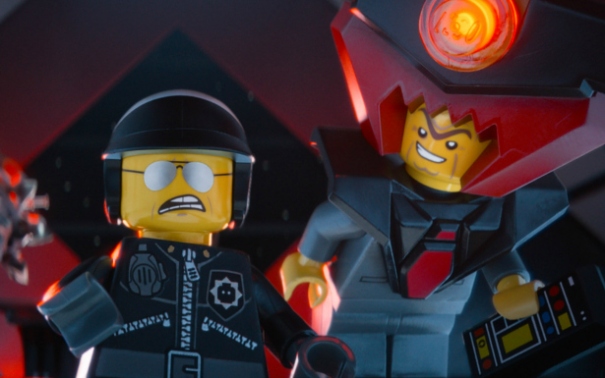 How is this like Occupy? What does this have to do with activism? Isn’t this movie basically an ad?

I’ll answer the last question first. Yes. In the movie playsets are presented as better if interacting together and the importance of trusting your instincts and creating with your heart.. and then they created playsets specifically for the movie. Huh? +catchy soundtrack +videogames based on the movie +a rumored sequel. So… yeah, it’s a 2 hour long advertisement.

Which makes it all the more surprising when you realize that there’s a group of people from all backgrounds (franchises) and walks of life (playsets) working together against a corporate mogul seeking to brainwash citizens and keep societal structures from which he benefits in place.

President Business (Will Ferrell) creates boring shows and annoyingly catchy songs to pacify and distract the masses! He owns the TV station, the radio station, makes commercials, sells food and hoards artifacts. President Business seeks to stratify characters into their original playsets and make sure THAT’S WHERE THEY STAY. Complete metaphor for media diversion and power structures that seek to hinder class mobility. That’s right. A movie about colorful bricks that’s about class mobility, corporate control and citizen uprising. Emmett was born to be a construction worker. Everything he’d been taught, all the directions he received told him he was on the right track, he was a cog in the wheel. And all it took to shake Emmett, and later others, out of their watered down, “good enough” existence was to be shown that there was another way. And if they didn’t fight back, if they didn’t think outside of the directions (society’s rules) then they would be prisoners forever!

Along the journey Emmett meets WyldStyle (a girl with big ideas who’s a little insecure and kind of an idealist), Batman (who is kind of a dink, awesomely voiced by Will Arnet), Vitruvius (snarky, mystical hippy voiced by Morgan Freeman), Benny the 80’s astronaut, and all sorts of other “master builders.” But Emmett isn’t a masterbuilder, and this could be symbolic of many things. Emmett can make a difference. The same way we all can make a difference even if we aren’t a genius, a superhero, a PhD candidate, a celebrity, or a prodigy. We can all take action and make an impact!

You don’t have to be a special to make a difference. Everyone comes to the table with their own positive qualities, special talents and goals. Manipulating society means stepping outside of established rules and norms, a key component in the movie was communication. It happened with Emmett and the master builders, Emmett and WyldStyle and ultimately with President Business. Open dialogue, free exchange of ideas. They all use their talents, including Emmett. Emmett has been taught that he’s a piece of the machine but it’s also taught him cooperation. When he breaks out of following instructions just for the sake of it he is able to see when this is up for negotiation (putting the wheel on his head) or when it is more important to use teamwork and rules to get through -and destroy the system from within! Muahahahaa (like when they break into the tower) And WyldStyle’s “You should trust me! I’m on TV!” speech after added to the “nefarious media” theme, too.

Okay okay, what else? Talk about the other master builders.

WyldStyle is Batman’s girlfriend. Batman writes bad electronica and is kind of a self centered douchecanoe. But he’s also hilarious and resourceful -as he should be. But it’s always clear that this isn’t the Lego Batman movie.

WyldStyle is Batman’s girlfriend. But it becomes implied that Emmett wants her to be his special friend. And they can be friends. It just reeked of “nice guy” horseshit. Example- Batman disses WyldStyle to chill with the Star Wars stars. WyldStyle is sad and Emmett comforts her -by insulting Batman and saying she deserved better. BUT Batman faked them out and stole a part they needed and came right back. He even caught Emmett talking smack and doesn’t get aggro about it. But up until that point, Batman had been helpful to the cause, kind of dismissive of Emmett, but helpful and he saved their lives and what does he get? Some “nice guy” chump trying to get close to his girl.

And there are barely any girls in this movie. There are dudes aplenty on both sides. But there’s spunky loner WyldStyle, not enough Wonder Woman and… Unikitty? A cat unicorn? Does that count? Even if it does- damn are the ladies underrepresented. Shouldn’t be surprising since Lego is FREQUENTLY criticized for catering almost solely to boys or “gendering” the toys in obvious, stereotypical and demeaning ways. 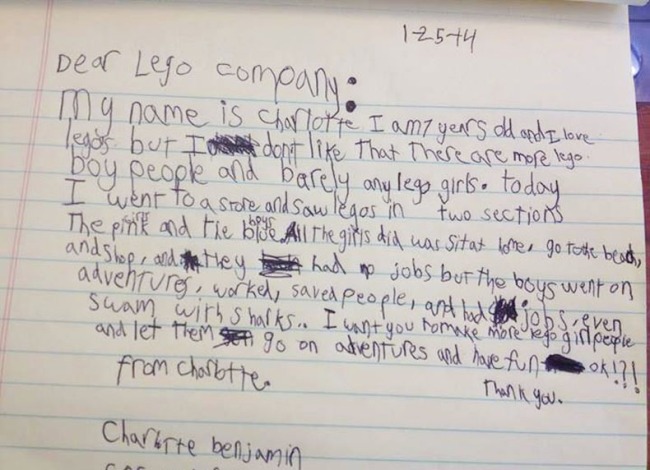 So I hope that if the sequel comes to fruition –which it appears it will– I HOPE they keep young girls in mind. I won’t be holding my breath since we are taught that “boy stories” are “people stories,” but “girl stories” are just “girl stories” This movie was great, had a stellar overall message. New writers are on board for the sequel …I’m skeptical… but hopefully they can hold true to the essence that encourages action and self expression instead of being (just) a way to sell more toys.

alternet.org got something totally different out of it.