At the Jean Grey School we see present day Beast lying awake, riddled with anxiety, his head heavy while he thinks of what a mess he has made bringing back the original X-Men. There’s a man standing over him. He tells Beast that the consequences of his actions are infinite. And through interpretations of different artists we see these possibilities that have been destroyed. The first being Bruce Timm drawing Jean Grey. Jean Grey, who has been heaped with tragedy and catastrophe has recently gotten a bad ass powerset in Guardians of the Galaxy #13, and we see that, but on the next page we have another version of Jean Grey the Jean that this Jean will become, the one in the Brotherhood who bends men to her will. Arthur Adams/Justin Ponsor’s hard a desolate interpretation with crumbling cities and a throne of bent and twisted men directly contrasts with Bruce Timm/Laura Martin’s peppy and fresh bright and uncluttered view of young Jean. While not necessarily my favorite art of the issue the juxtaposition was in my opinion the most well done.

David Mack’s Cyclops page was also masterful. On this page we see Cyclops displayed like Jesus on the cross (but it’s an X) in front of protesting masses while words describe how he is abandoned and mocked. It’s all water colors and is amazing.

Scottie Young/Jason Keith’s Iceman turns into ice-monsters rampaging out of control. There was a touch of this in BotA where Iceman confronts his future self as a soul less snow monster (who turns out to be future Jean Grey’s puppet) and then as a snow wizard. While the narration says that Iceman will be destroyed from within, this seems to be a fully outside interpretation. Iceman doesn’t seem that perturbed in the series currently. 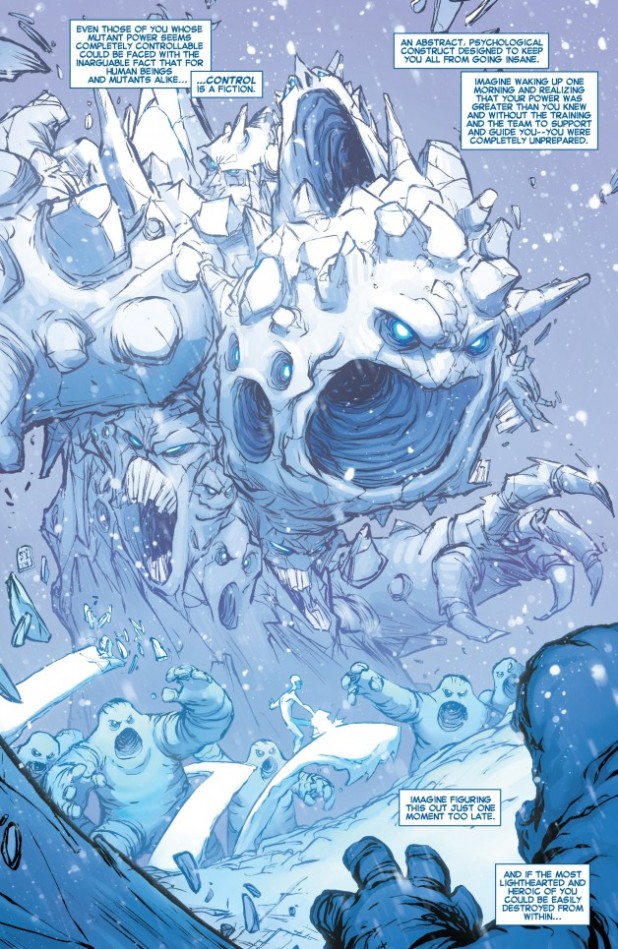 It kind of goes on from there showing how monstrous they’re all becoming. That Beast will lose more of his humanity (something about dinosaurs, admittedly, I didn’t get it. I don’t know who was on Kent Williams’s page. The Colossus page was unremarkable). Beast sits up in bed with his head in his hands and pleads to be shown “the good.”

JG Jones gives us an image of the whole X-Men line up being treated as celebrities. Beast looks like Ghandi, while light reflects off of them instead of shadows, it’s really unique. The X-Men are photographed by fans with signs that say THANX Everyone is happy and playful. Magneto even looks pleased.

Ronnie Del Carmen’s image looks like a cross between a vintage Charlie’s Angel’s themed pinup catalogue and a children’s picture book about summer vacation. Which makes sense, since he’s been a storyboard artist on Ratatouille, Wall-E and Up. He draws some X-Ladies having summer fun and beheading monsters on motorcycles. I really don’t get it, but it looks GREAT.

Maris Wicks gets a few pages to tell a story of an ill timed love story featuring Kitty Pryde and Colossus. Hyper cartoony tale of bad timing. Highlights include KP wearing a shirt that says “I’m not Daredevil” and having Nightcrawler’s baby.Jason Shiga keeps up with the cartoony and tells a tale of Scott + Logan BFFs FORVER! With a senile Cyclops and still aggro Logan eating spaghettios. And the less serious fashion continues in Dan Hipp’s pages where Jean and Logan fight like the old married couple that they are. Jean’s a couch potato who barely looks away from her laptop when he comes in bleeding. The squabble over him forgetting to pick up hot pockets. I didn’t love it, but the “I can still read your mind” jokes were funny.

There’s more about who will bloom and find purpose and then Beast is confronted with the reality that these roads will never be taken because of his actions. Beast pleads, “Then help me. Help me put it back. Help me.”

And Beast tries to convince himself that it’s not too ay, and the page ends with him as restless as ever.

It was a really great issue, The tension that Beast is enduring is very intense and conveyed really well, angst is Brian michael Bendis’s main jam. It was really amazing to see where the artists all took their page/s along with the story. Some stood out more, which is debatable. But “Greatest Artist Roster” ever? They’re going to have to arm wrestle Harley Quinn #0 for that one. A great issue… i don’t know if the sidenote was worth it. Don’t hate me. But Scott’s in space, Jean Grey AND X-23 are missing him, the plotlines for KP and friends are all wrapped up and in need of a new adventure. And apparently that adventure will be Beast continuing to find a way to send everyone back again, even though that has turned more X-Men against each other. It doesn’t make sense it just makes angst. But… it was good, too. I’m on the fence.