The final issue. I’m heart broken. This was a consistently good series with unique characters and nods to the rest of DC Comics, Gail Simone’s other titles and Coral City’s sister city Gotham. 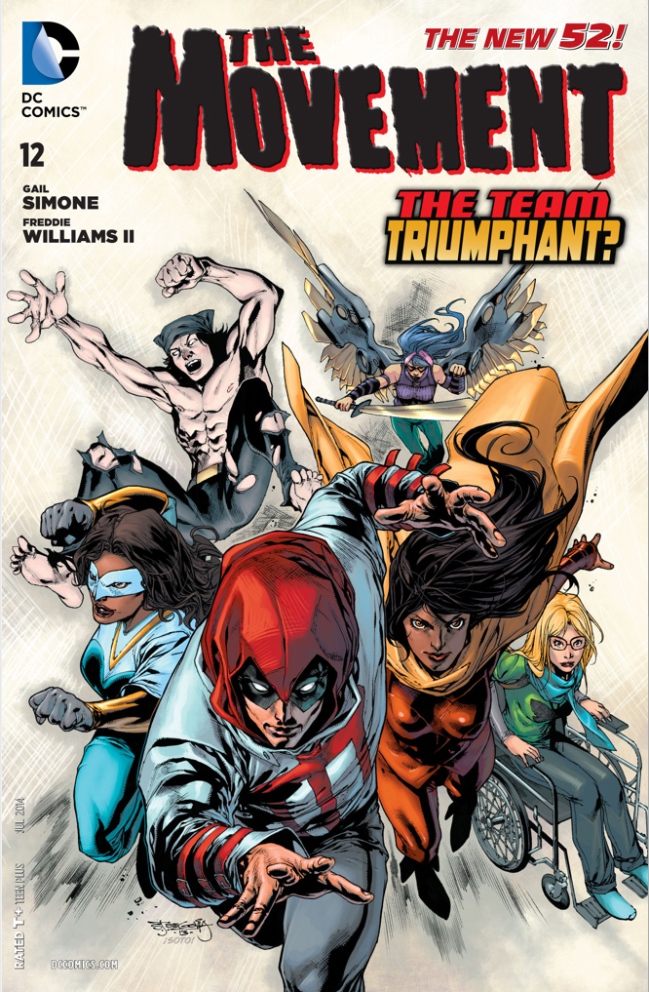 Freddie Williams II has always provided art that well suits the feel of this title, but it’s above and beyond when we’re treated to a 2 page spread of Virtue’s ultimate dream for “The Movement”: Virtue and crew are fighting side by side with Justice League bigwigs. Mouse vs. Cheetah, Katharsis sword fighting against Deadpool, Virtue throwing down against Sinestro. It’s gorgeous and really showcases all that Channel M’s hacktivists could have accomplished. I’m so bummed. Virtue thought they could be big like the JLA, but with a twist, they could show people that empathy was as important as strength, that anyone could be a hero, “But then I remembered that I live here. In the ‘tweens. And they were never going to ask us to join a club that lives on mount Olympus.”

24 hours ago (after a “we’ve come so far” montage where Burden cracks a joke and Mouse finds a new woman to like) Mr. Cannon infiltrates the sweatshop. He tells them that his son is the Cornea Killer. And that he needs to be stopped. The Movement confronts them and offers him an easy way. Come quietly and he’ll go to the police… if not, “the ‘tweens gets some of its blood back.” The Cornea Killer does not comply. In a twist, Cannon has Whitt on back up to take out The Movement.

The Cornea Killer sacrifices himself in front of Whitt’s bullet to save his father. But it’s too soon, Vengeance Moth takes out Whitt before anyone dies. We get Holly’s whole backstory as told to Captain Meers and it all ends on a note of hope instead of death or disbanding.

Gail Simone did a wonderful job wrapping everything up, I hope to see Virtue make a comeback somewhere in Gotham. I enjoyed the DIY nature of the heroes in this book, they’re a resourceful bunch, I’m sure they’ll pop back up somewhere. I hope. I’m really sad to see this one go. It’s one of the only DC series that I read and the only I actually consistently enjoy. I think this could have gotten a better start is it wasn’t billed with the Green Team. That one didn’t appeal to me and I think there was a huge misconception that you had to read BOTH; so people missed out.

The Movement is cancelled, but has til issue 12 to wrap things up tight and Gail Simone seems to be tying up loose ends already. 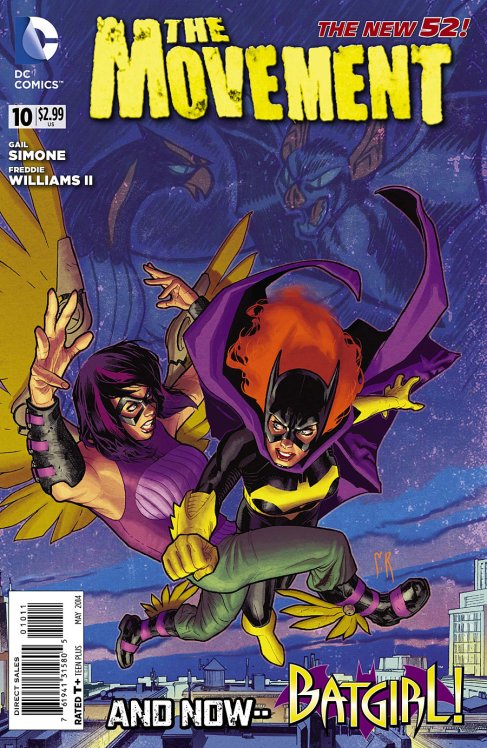 I love this cover by Stephane Roux. Their spirit animals, the surprise and determination. Perfect.

Channel M take the KO’d Batgirl back to the sweatshop to unmask her, but Virtue with her camera phone and Batgirl groggy on the floor gives Barbara some Killing Joke flashbacks and she flips out on everyone…

…except Katharsis who has gone after Horizon. And they fall in Insta-Love. Katharsis and Horizon hook-up and while Katharsis isn’t usually affectionate, she is VERY impulsive so… I’ll buy it. But I had to suspend some disbelief to consider that she would actually behead Horizon after it’s discovered that he’s killed two police officers in Coral City. Virtue decides to hand him over, with a promise from Batgirl that she’ll check in on him. He just wanted to be a hero, he’s not in control.

Mouse: a sexual what?

Vengeance Moth: Poor Mouse. I thought being around kids with powers would be all hookups and booty calls.

Burden: I never understand anything anyone says anymore.

It’s too good. It’s just too good. But Channel M got a glimpse of the big time with Batgirl, and a friendly goodbye between Virtue and Batgirl suggested that Virtue might stop by Gotham sometime. It was good to see them interact, Batgirl is stronger, more capable but she saw the good in what the unglamorous Virtue and co. were accomplishing.  Batgirl is used to the money and the resources and the bad guys going to Arkham. Virtue is used to scraping by and things not being so cut and dry.

The Graveyard Gang, who got their buns kicked a couple issues back officially quit. The Cornea Killer is still out there though! Next issue promises to bring Burden’s Angel Brother! The next couple of issues are going to be epic, but unfortunately will likely feel rushed the way this one did. Freddie Williams did a great job on the art as well, the layering of the panels during Batgirl’s Killing Joke flashback was particularly epic, snapshots, jumping between reality and memories conveyed urgency and fear really well.

Since the episodes were rearranged, making last week’s super heavy drama and Kennex internal struggle and the Anna situation and this one… seemingly nothing about that. We got interesting background plot cookies about Dorian. Dorian received some implanted memories that he tries to make sense of. Rudy puts the kibosh on that, but there’s still the matter of who planted them and why. 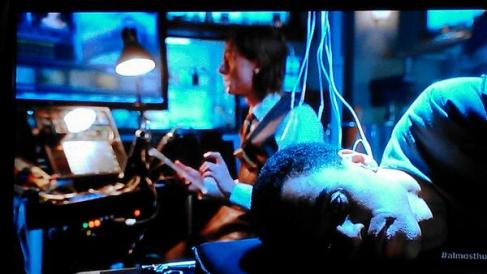 But the central part begins with a family. Their very secure smart-house wrongly identified an innocent teen as a threat and murdered him. Thankfully we don’t spend too many precious seconds that I could by ogling Karl Urban listening to ramblings about the family’s “right to own a smart-house.” If you think this sound like a supertech adaptation of stand-your-ground-laws gone awry: you would be very very right. With Zimmerman never shutting the fuck up, and the recent Dunn trial it’s not hard to see how a terrifying and heartbreaking sci-fi plot could be birthed from these tragedies. But Almost Human made the *interesting decision* to make the teen white and the family black. I think TECHNICALLY the house was still the vigilante/cowboy/wannabe Batman/asshat/murderer. But I’m not on board with the racial switcheroo that happened here. They didn’t lean heavy on it, racism has never been addressed (classism has frequently) and I think we are to believe that 2048 is “post-racial” the episode focussed more largely on flaws in technology that we trust with our lives.  Which is good. People still don’t understand why the “race swap” is bad? Let me take a moment: Families of PoC children have to worry about their children getting shot at for walking down a street and then victims get blamed for what time it was/how they were dressed/crimes someone else committed/other people’s racism and frankly fucking no one has to worry about being murdered by a house, AND people who programmed the house and crunched the data probably would have been skewed to NOT address a white teen cutting through the lawn a threat. That’s why it’s bullshit.

On the positive -background characters are very diverse. A few tropes were apparent (hackers that dress like they are in the matrix, the aforementioned “ironic” race role reversal) but we have brown female CEOs, female hacktivists and EOE for villains all around, every episode. Gender equality for the bad guys.

Oh, and Stahl got out of the station! She went undercover as a hacker! She went with Kennex, “Aussie?” accent +eyeliner. Weirrrrd. But cool. 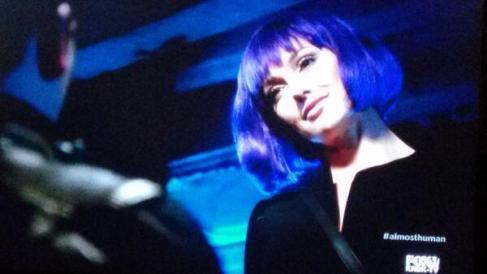 More cliches survive. Kennex saves the babes and has got jokes. The jokes this time were at Detective Paul’s expense. He was out and Kennex spread increasingly embarrassing rumors about why he was absent.

Maldonado’s reaction was so rad. I love her as a character.

The early scenes of the house turning against the family were flat out terrifying.

This show NEEDS to be renewed. NEEDS TO BE. So far no new eps ordered. Makes me nervous. How can FOX cancel so much good Sci-Fi but still air American Dad. Get it together.