Uncanny X-Men #20- Maria Hill is still attempting to interrogate Hijack. Then Maria’s brain gets hijacked. By telepath mutants and present day Cyclops, AKA Scott Summers: face of a group of deviants, devil in disguise, killer of Charles Xavier, egomaniac… etc. Maria Hill has been compromised. Continuity is a major issue. She is “a lesser character” but has been playing important roles in comics I read. As far is this series is concerned, style and dialogue are on point.

Maria Hill crushes on Cyclops. By the way.

But out of the exchange all that Cyclops learns is that the enemy is using Cerebro to find them. Eva encourages Emma to yank cerebro. And then suddenly Scott jets to talk to “old blue buddy” Beast. Emma is left behind. …polite students pretend not to notice. Outside of the Jean Grey School: Scott is stopped by big leagues Storm, Rachel Grey +Iceman and then attacks AS SHIELD finds what’s happening.

X-Men #13 Vampire Jubes on the cover =so promising…

Mann’s art gets front and center instead of being the last 5 pages. Psylocke and Storm have a woman to woman about who is really leading this X-Men team. Psylocke say that Storm should throwDOWN (and I agree.. Rachel is a latecomer in this crew. She’s not the leader.) Water color backgrounds are gorgeous (but there is less care taken when Mann’s art was 5 pages- still it looks AWESOME) Jubes is there while Beast does Shogo’s check up; but he also wants to know more about the side effects of vampirism on Jubilee’s end…  Rachel Grey is bumming. And I don’t blame her, progeny of the Phoenix and whatnot. but her drama vs. Storm’s?! Ororo any day.

Then one of the kids get hit: Primal. Quentin Quire couldn’t trace it. (and he can’t take that; he’s young no one can tell him he’s wrong) Turns out… this shot was made with surgical precision. Literally. Surgeons had that gunshot was intentionally made not to hit his heart.

Harley Quinn #5 THE DOCTOR IS IN

Before I get to the reviews. Let me just say, I was incredibly excited for these. I even got the collectible lenticular covers, OMG. Way to earn your nerd cookies, EightBit!

The day before I picked these suckers up I had just reviewed The Movement #4, and I was all “Holy shit, diversity!”

And then Batwoman’s writers, W. Hayden Blackman and JH Williams III, quit over being told that they could not pursue long standing storylines in the way that they wanted. They felt as if it compromised their work, the story and the character. Among the scrapped story lines was Kate and Maggie’s marriage.

Now, how much this had directly to do with DC refusing to allow Batwoman to get married, and why: is DC opposed to the institute of privileging marriage (I wrote my thesis on that, BTW), or are they anti-gay? It’s easier to latch on to the more inflammatory option. However, not allowing the creative team to… well, create in a way that made Kate Kane a well rounded character is clearly a mistake. DC was willing to Let Harley Quinn and Poison Ivy flirt and have innuendo as a “joke” appealing to straight male fantasy… oooh sexy bad girls are they or aren’t they.  (More on Harley Quinn later.) DC, lesbians are not a joke for straight men to get hot and bothered to. Get your perverted shit together. 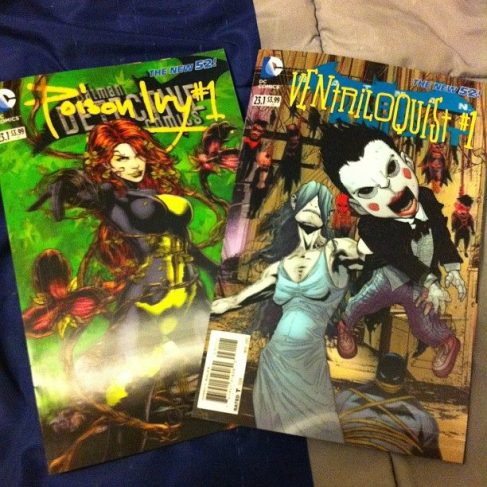 There’s no Batman. The Justice League is dead, the Crime Syndicate has taken over.

Amid the chaos and anarchy, Pamela sees a man and woman fighting while their daughter hides. She flashes back to her similar childhood. Her mom used to hide out in the garden with Pam, her dad bought her mom flowers to apologize for beating up on her, thus she learned that flowers could manipulate people.. (this was not previously part of her origin, and frankly I am not a fan). In the middle of these flashbacks, including finding her mother buried in the garden at the hands of her father she finds the Gotham Botanical Gardens being burned down. You know it will end poorly for these suckers.

The story flashes back to her college years, where she seduced the dean. Her First kill, her father. And then her internship at Wayne industries where she seduce’s Bruce Wayne with her pheromone pills.

She pitches the idea of her plant based pills that trigger specially designed behavioral responses which can specifically target the needs of clients. Bruce Wayne fires her. He fires her and keeps the rights to her research so she can never pursue other firms.

It was during the struggle with the guards to get her hard work that she was doused in her formula. (I like this portion of the origin story better than her being dosed by a professor as an experiment).

During all of this, Poison Ivy is walking around followed by awe inspiring plant monsters, and she calls to the plants to take over the concrete. The issue ends with Commissioner Gordon confronting Ivy on the roof of Wayne Enterprises, he points a gun at he and she dives into the jungle she’s created, vowing that her green kingdom will flourish.

Good read, I don’t think that sad sack part with her family was necessary. Academia can drive you crazy enough. The art is great. Poison Ivy was always my favorite. It’s so true, the earth doesn’t need people, the plants will always grow, the earth will reclaim itself.

Ventriloquist nails traumatic childhood with neglected twin Shauna. Living in her twin brother’s shadow drives her eight shades of crazy. Her brother was a child star while she was bullied and called “Shabby Shauna.” Sudden emergency of telekinetic powers mixed with angst and gallons of jealousy and Shauna throws her bully into the road and gets revenge on her brother, Ferdie. Then she meets a party clown with a ventriloquist dummy. She names him after her “poor dear, homely dead brother” and sets out to find her place in show biz.

With the lights out in Gotham she lights up a theater, entices an audience and starts a show that will stop their hearts. The Crime Alley Cretins try to take over the theater… yeah, it gets ugly. Shauna and Freddie wreak some serious havoc while cracking some sick jokes.

This storyline promises a continue in the pages of BatGirl!

Man what a creepfest.

A day later, of course, the internet exploded as an article called “Want to be a Dc Artist? Just draw Harley Quinn naked committing suicide.” Made the rounds. Let me be clear. I know Harley Quinn isn’t supposed to make good decisions or be a role model… but why does this mean she has to be hyper-sexualized and defeated? and not even cleverly so at that.

Look, DC here’s the deal: comic books are good. Everyone wants them. And we all want to feel represented. We know, we know, your core audience is straight white men who don’t know how to talk to girls… broaden your horizons. If you don’t allow your characters to have innovative storylines you can’t blame it on the audience. 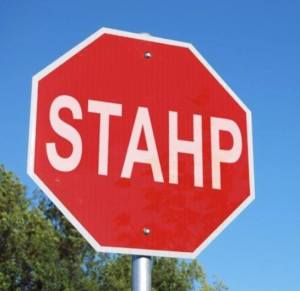 The Poison Ivy book would have been clever without killing off her mom (I know, her abusive dad taught her that flowers could manipulate people, it was her thesis! No. Still no).

Ventriloquist was dark creepy and was an interesting social commentary on the pressure society puts on girls to be beautiful. Not my favorite villain by any means, but a great story.