From the Agents of SHIELD episode “Yes Men” it was easy to gather that Lorelei had feminine wiles that would cause “men” to go to endless war. She’s used to commanding armies, she’s used to demanding the finer things. But to her… they aren’t men, not really anyway, they are soldiers… they are ants.

Lorelei made her first appearance in Thor #337  in 1983. The story that she falls into is one of unrequited love, she’s always getting at Sif for liking Thor (since the 80s!), Loki likes her and Lorelei can have any man she wants… well almost, she can’t seem to get Thor. There’s lots of convoluted trickery including spells, potions, dragons and fake names. Amora, her older sister, tricks Lorelei and Loki into falling for each other. In Loki:Agent of Asgard #2.. this is still somewhat the case. Although, it’s more likely that he feels a fondness for her because of their similar status in their families. Lorelei gets in over her head enough, from wreaking small havoc on the love lives of her cohorts to teaming up with Pluto and spawning Valkyries.

She’s a little much.

But look at the way people are all captivated by Hiddleston, there’s no reason to hate on a female version of Loki. 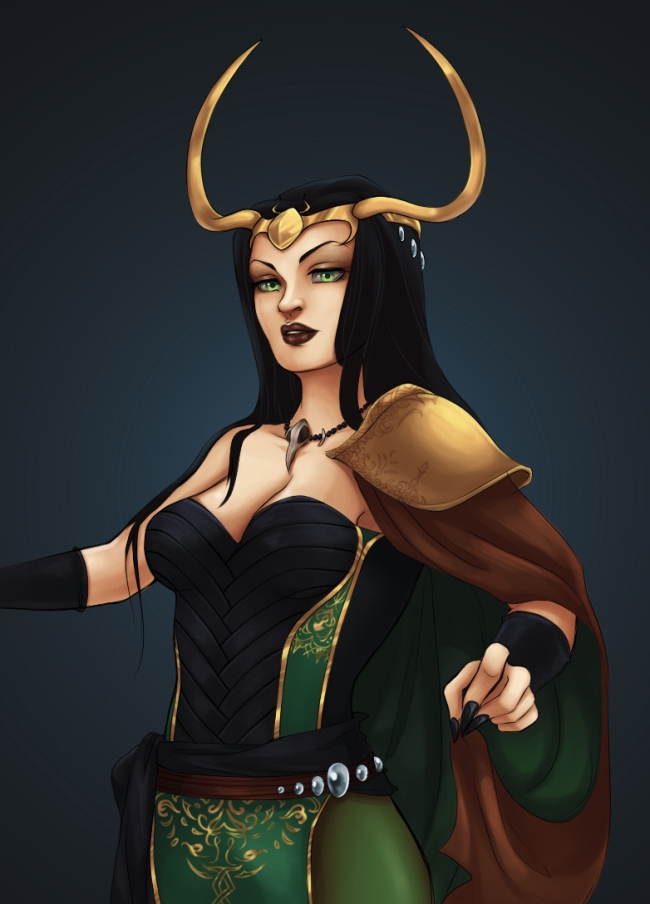 But Lorelei’s not a knock off.. she’s her own personality evolved out of a similar experience. She might be a “tramp” and a “hussie” but let’s face it: So? She knows what she wants and she knows how to get it. And that’s hardly the only weapon in her arsenal. She has sorceress powers, can turn men to stone and she’s skilled in combat.

So when she is set free in Thor: the Dark World and debuts on the small screen taking over a biker gang’s empire in the middle of the desert -did anyone recall that Odin was being impersonated by Loki at the end of that film?! So did Loki want his lady friend back? …think about it.

While I’m not a fan of her role in reinforcing the gender binary (her power only works on men… doesn’t leave a lot of wiggle room… also no mention of gay men or lesbian women… erasure is a dick move, this should be retconned by now.. shit.) and despite the fact that her powers aren’t limited to coercion she’s seen relying heavily on her feminine wiles.. I’m still a fan. It is tropes on tropes. But we live in a world where people do infact have “good looking” privilege. Lorelei takes that to the next level. And that’s one of these times when I want to remind everyone why “conventional gender roles” are bad for everyone: Is it really her ‘fault’ that men will all fall on their swords for her? They were taught to look out for beautiful damsels in need… she just eggs them a bit further. It’s that specific reason that I can justify that it is only ALL men influenced regardless of orientation. Male privilege. Society said that men are heroes who fight for women. And this is the result. She’s manipulated a broken system to her will.

Featuring: Guardians of The Galaxy 11, PrinceLess #2 & Deadpool: The Gauntlet

I have never read Guardians of the Galaxy and I’m not usually a bandwagon jumper, even when there’s a movie, but this is a crossover with my 2nd favorite X-Men title, so there you go. Also by Brian Michael Bendis. Art by Sara Pichelli. Quill and Gamora have a chance run in at a bar, they’re both Wanted, yet Quill is at his usual spot and he cleverly quips; “Because it’s the first place anyone would look for me. So they probably already looked for me here and moved on.” But the woman is not Gamora! They’re a really a bounty hunting Skrull! Ohh snap. I really dig it, it reminds me of all the Space Western Anime that I like. Gladiator of Shi’ar attempts to explain Jean Grey’s very complicated history in 140 characters or less. There’s argument about whether Jeannie should face trial for crimes she TECHNICALLY hasn’t committed yet (also, she already helped kill that version of herself). The real Gamora and Angela are having a girls day shopping trip -for weapons- when they run into imposter Gamora and Quill. Gamora tries to figure out what the heck is going on, but Angela decapitates her. Angela loots the body and Quill wakes up in one piece. All together all the Guardians find out what the Shi’ar are planning with Jean Grey and they decide to interfere. The last page makes it.

Also, I hate Groot. I hate any character that only says their name!

Princess Adrienne’s brother is getting his lesson on how to be a proper man and swing his sword around. His father makes all manner of emasculating comments to him because he’s the sole air to the throne. None of his sisters have been rescued yet. All of a sudden someone brings news about one of the girls! But it’s not good news, the tower was burned to the ground. No sign of Adrienne. The King swears vengeance! Just then they see her dragon flying around the castle, the King tells everyone to get armed. It’s Devin who notices the rider on the dragon, and sees that they are going for Appalonia’s balcony. Devin fears for her safety and sets out to prove himself a dragonslayer. Adrienne and Devin predictably swordfight, after Devin relocates Appalonia. Adrienne easily wins and reveals herself. They have a heart to heart and Devin reveals that he left the sword in her room. Devin said he wouldn’t let Appalonia be locked away so his father hid her far away with the meanest guards so she’s not there anymore.

First mission didn’t go smoothly, but Adrienne stays true to her quest to save her sisters!

The art is a little plain in this one, light on background details but the cover is fierce!

This is part one of a thirteen part comic that comes out every week until the end of April?! Whaaat? So I’m already super behind. Greaat. And it’s only being further released digitally. It’s out right now up to issue 6 (can be purchased here). Get with the times and save trees.Deadpool is England fighting a man over a girl. He gets shot, expels the bullet which ricochets of the other man’s jet pack and turns it on, sending him off of the airplane they were fighting on. Epic entrance. Then he realizes his katana is in the pilot’s head, and like all cartoons it doesn’t take effect til you see it. He saves the girl from drowning, gives her CPR, she sees what’s under the hood and runs away. 70s style art interlude with theme song and chimichangas. He gets shot in the head and wakes up on a park bench to a vampire! “At least you’re not twinkling and have a shirt on!” Vampire makes a dash, and Deadpool proves we’re soul mates by saying “Don’t make me run! You wouldn’t like me after you make me run!” The encounter gets physical, and the vamp disappears, Deadpool doesn’t know what the vampire rules are here and asks if british Vampires can turn invisible. He catches the vamps trail and follows him back to his master: Dracula.