Kamala is disoriented and still in a mist, she keeps flashing between looking like herself and looking like Carol Danvers. She hears 2 of her classmates drunkenly getting out of hand. Kamala hides and inadvertently makes herself small. But when self absorbed bully Zoe falls into the lake, Kamala thinks of a passage in the Qur’an and rushes in to help. She transforms into Captain Marvel and grows her arm large to scoop the girl up from the bottom of the lake (Zoe also says that she’ll never get wasted again).

Kamala is still getting the hang of it. She runs off when she can’t figure out how to get her arm small and once she figures out that she can reverse the effects she runs for home. Where she gets busted. And her parents fuss that she is untrustworthy and they tell her that they are disappointed. Her brother offers to pray for her. She also finds out that her friend called them -broke the code and ratted her out!

And she makes a decision. If they can’t understand why she wanted to go to a party, they aren’t going to understand that she has superpowers.

G. Willow Wilson nails Kamala’s reactions, from confusion to panic… from being overwhelmed to solving a problem. Adrian Alphona brings these emotions to life, the scenes are vague and distorted by the mist which fits with the narrative that Kamala has no idea what is at play. She catches a glimpse of a person flying through the air. Is it a hero? An Avenger? ..or will it be a villain?

What I enjoy is that this book is diverse. It deals directly with Kamala being bullied for being Pakistani and Muslim, Zoe comes by and says awful white-centric remarks.. Kamala is a first generation American, she has an identity that is not mine.. but much in the way that one can still listen to Against Me’s trans dysphoria blues without being trans… most can relate to a time when they felt like an outcast. In this case most people can remember when they did something that they weren’t sure was the right thing to impress their friends and had to live with the consequences. Most people can remember a time that they felt like their parents didn’t understand them. And it’s great to see this told from a perspective that I don’t have by an author who is drawing upon her own life experience. 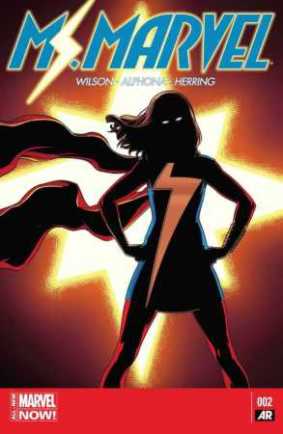 It’s wonderful. If you like teenage supes and/or appreciate diversity in your media you’ve got to grab this.