Skye is still hanging by a thread. The team gets a negative report about the likeliness of her coming out of this intact. Everyone gets sad, May storms off- to beat the crap out of Ian Quinn -billionaire who shot Skye, lackey to the Clairvoyant- she does, Coulson calls her off and then he says he has a plan. SHIELD saved him and he was long dead, Skye is still alive. The doctors who traeted him can help her!

Only another SHIELD team shows up to collect Ian Quinn and stop them for this horribly unsanctioned mission. The agents are Agent Garrett (Bill Paxton) and Agent Triplett (BJ Britt). Bill Paxton was a cranky older agent with a vendetta against Quinn who repeatedly referred to Skye as “the girl” despite the fact that she is an adult woman. BJ Britt is fine as hell and his character got a crush on Simmons.

I will ship Trimmons. No lie. Come back soon Triplett.

Anyway, in the journey to find the facility and the doctors, Simmons finds out one compound that might save Skye: gh375. And May gets suspicious about all the unanswered questions in Coulson’s file. But they get to the facility and the security door asks them “How was the drive from Istanbul?” And no one knows so they blast their way in. Coulson gets freaked when he sees the robot thing that poked his brain. Yeah. And he finds what they need for Skye. He sends Garrett off with it, but he needs to see behind the door marked: T.A.H.I.T.I. and behind that door Coulson finds… And Coulson yelled “Don’t give that to Skye!” But Simmons already had. And Skye convulsed, but then she started breathing and her heart beat normally again.

Later, May goes to ask Coulson what he found. And he says it was nothing. Says it was all in his head and he just got freaked out. But the audience is treated to the world’s most absurd flashback… And I can’t really explain it to you…. dude, I don’t even know… someone said a Chitauri cadaver. It looked like a mummy of Dr. Manhattan… I don’t even know. The live tweet exploded with WTFs. Even Marvel didn’t know WHAT. 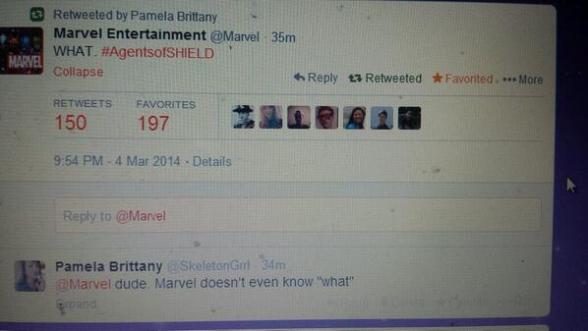 In the after scenes we see a cocky Asgardian woman enchanting a man away from his wife in the middle of Death Valley. I was thinking it would be Amora banished to Earth by Thor, but it’s Lorelei-

an ally and confidante to Loki. Lady Sif will be coming after the saucy vixen.

This was a great episode back, but it seemed to throw relationships up in the air. May and Ward barely spoke, May showed concern and tenderness for Coulson, Simmons got all doe eyed at Triplett… le sigh… tragedy always tests romance. I’m sure not sure what T.A.H.I.T.I. stands for or WHAT they injected into Skye. I just can’t even… Glad to have the team back though. I hope BJ Britt has A LOT MORE SCREEN TIME. That is all.

8 more episodes this season! Damn, there’s still time to get more fans on board and keep this show going strong!  Do you think Agents of SHIELD has hit it’s stride?

Edited to add @AllanAnthro threw down that the alien might be Kree. There are blue Kree and Pink Kree. it Skye is part alien (thus her 084 status) she might be part pink Kree and thats why the injection helped her, because the transfusion was suitable for her body? Maybe.

One thought on “Agents of SHIELD- episode 14”

Error: Twitter did not respond. Please wait a few minutes and refresh this page.