Gail Simone does doubles down on the awesomeness as Batgirl infiltrates Coral City. Ms. Gordon is trying to track down a superpowered young man to turn over to the PD, but in the tweens; they don’t just hand over citizens to corrupt cops. Batgirl gets held back by Channel M kids and their “I see you” catchphrase.

Meanwhile, Virtue and Katharsis are reading Mouse for his “date” with Tremor. She’s still not buying it. Partially because of the rat in her heart shaped candy box. Vengeance Moth enters and tells the team that they’ve got their first real super in Coral City.

But Batgirl has done her homework and knows just wear to go to get the Movement’s attention. She quickly does, but instead of teaming up vigilate to vigilante, Batgirl threatens them. Says she could find some reason that The Movement should be incarcerated. Even to other vigilantes The Movement is too fringe, too anarchist! Katharsis busts in with a personal grudge, seems Babs took her down when she was working for Knightfall in Gotham as one of The Disgraced (funfact: Kulap Vilaysack AKA Katharsis is Gail Simone’s creation, she first appeared in Batgirl #10) They tire each other out some, and Batgirl proves to be the superior fighter… Then Virtue invites Barbara to partake in her fave problem solving technique, Milk Shakes and Donuts.

Elsewhere, Captain Meers and Yee -still banged up from his tussle with Whitt- are getting closer to discovering Virtue’s identity. Her current alias is Holly Rae Hunter, but in her past life she has seizures, she was “presumed dead” and her father was so depressed that he robbed a bank in a suicide by cop. Meers shot him.

So there they are in the diner with their capes and cowls, trying to get facts straight. Batgirl keeps staring at disabled supe Vengeance Moth who calls her out, “You keep staring at me. It’s okay, wheelchairs freak some people out, I guess.” Might I add- I totally loved this exchange, Batgirl was paralyzed by the Joker and became Oracle: 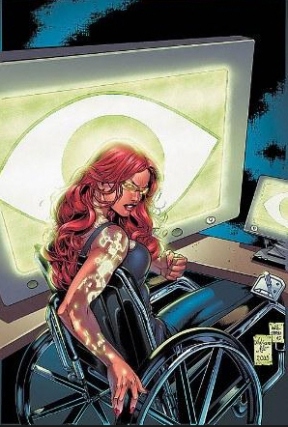 Joined Birds of Prey, worked for the US government, helped the JLA and went toe-to-toe with able- and hyperable-bodied villains. She had been in a wheelchair since 1988’s the Killing Joke. When the New 52 but Babs back in her cape and cowl disability advocates went fucking nuts. And for good reason. Simone, for her part, said that she didn’t agree with disabling Batgirl to begin with- she was paralyzed by the Joker to advance the plot for the male heroes, and she feels that it wasn’t fair to keep her in a wheelchair while all these other characters were being regenerated and resurrected. So now Babs has a chip in her spine and did some serious rehab, which got her back to the vigilante lifestyle (Batman got his spine broke in the third Dark Knight film, he just got his suit upgraded, why should another member of the Batfamily have to deal with real world repercussions?). But I felt like Simone was calling herself out via her new -albeit minor- disabled superhero.

They tell Batgirl she’s not going after her perp, Horizon. They’ll handle it. Batgirl protests and Katharsis KO’s her. They decide to take her back to the sweatshop and unmask her.

Which of course happened in Forever Evil with Nightwing.

Are The Movement setting themselves up to look like bad guys? What kind of heat is this going to bring?

In the final pages we see Horizon going too far.

What did you think of this issue? I really dug the cross over. And no matter where you side on the Oracle/Batgirl debate: 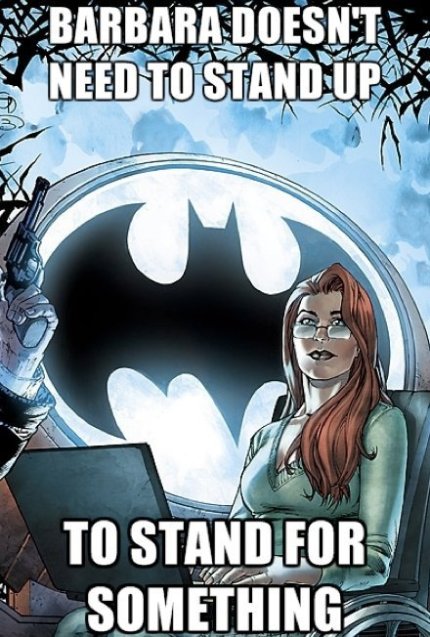