This book begins where the other left off. Peeta and Katniss separated. Katniss is in District 13. Everyone is preparing for war.

I didn’t want to finish this series. I liked it. Really. More than I thought I would. But there came a point when I just knew there was going to be no way I was going to get what I wanted out of it.

Katniss was rescued from the arena to be a symbol of the rebellion. Not because she could actually do anything. She’s manipulated from all sides. From the beginning, but it gets more flagrant as the series continues. The atrocity that it takes for her to FINALLY stand up against this is mindblowingly egregious. (By the time in the second book, when Peeta told everyone she was pregnant; I would have started shooting everyone who had a plan, involving me, that didn’t tell me about it. Goddamn ridiculous. BANG, you’re dead. Eff you.) But it was good that she finally got to that point.

During the time when Peeta and Katniss are separated, Peeta is forced/coerced into making these videos that tell the rebellion to desist. Katniss stands up to President Coin and says that Peeta and the other tributes need to be granted immunity (in a rare moment of strength) it happened early on in Mockingjay, and I really thought a new tone would be set, but instead Katniss falls for the same old schemes and tricks.

The names in this book, in particular are ..silly. It was hard for me to keep the new characters straight (which didn’t seem to matter). So I’m not going to try to even debate the actions of female vs. male bit characters. They brought back Johanna, Johanna, former victor. Johanna, who was in on the rebel plan. Johanna, with no one left to love. Tortured. Snarky and addicted to morphling. Johanna and Katniss become (wait NOT friends) allies. Johanna and Katniss, have done nothing to prepare for combat and get sidelined, decide to train together, to which Johanna says, “…I’m going to the stinking Capitol if I have to kill a crew and fly there myself.” So they train together and take a test that “exploits their biggest weakness” and Katniss passes, and Johanna …has a mental breakdown. And doesn’t kill a crew. And stays in District 13.
Of course.

At some point in the rebellion, Katniss makes up a plan of her own, keeps it a secret from everyone. Which serves them right. But then, she feels bad about it, and confesses. And Gale says, “Katniss, we all knew you were lying…” SHE THINKS SHE’S ORCHESTRATING A PLAN AND THEY ARE ALL IN ON IT WITHOUT HER KNOWLEDGE. “Do you really think Jackson believed you had orders from Coin?” Of course not, because only Katniss will repeatedly fall for this shit! UGH! There are even 2 times in this (just THIS) book where something was explained to her but she still didn’t understand it.

And Peeta and Gale. Who you would think at some point, would actually realize that the earth is not revolving around them. Gale says something to the effect of, “She’ll choose whoever can help her survive this.” Which he didn’t say as an insult, but Katniss took as one. Most people don’t get fairy tale love. That’s real life. In fact, those coming from poverty are more likely to list requirements for marriage as “steady income”, where wealthier people are more likely to list “open communication”. Basic needs get met first, everything else comes later. If basic security isn’t met no one gives a shit about the other stuff. 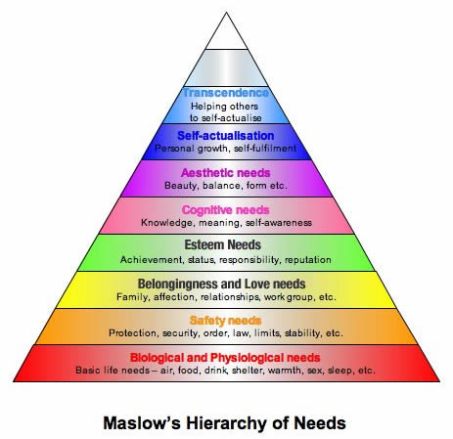 Most of them are operating around that orange area there, sometimes red. Gale is not. He’s much higher up on the pyramid there. Which is probably why he understands that. So, that’s interesting. Of course, I would have shot Peeta in book 2, so whatever.

There was a whole angle, too, with the camera crew filming propos and live footage. Since I read this after Feed and Deadline, it made me think of the defacto After the End Times motto, “If you’re going to die, at least die on camera. It’ll be our highest ratings.” I thought it was a fair assessment of how media spin can motivate people’s actions and choices.

I guess I have to rate this, there’s this thing with trilogies that the first book is really awesome and self contained. And the second one wraps things up but prepares to launch you in to the next book. At this point the author usually knows there’s backing for the third book so they leave some plot devices lying around. And then the third cleans up the loose ends and hopefully you get what you came for.

Honestly, there wasn’t a lot of character development over the course of the three books. Katniss frequently says that she is not the same girl that volunteered to take Prim’s place. But in so many ways, she is. Which, sadly, I could have forgiven if Johanna got to go to combat (and not die) or married Gale or something. The characters may have annoyed me, but Suzanne Collins writes interesting backdrops and assesses the actions that those in power will take even when they are supposed to be “the good guys”. I feel obligated to give it a 4, but what I want to say is 3. 3 and 1/2? 3 and 1/2 cups lamb stew with dried plums. That’s all.